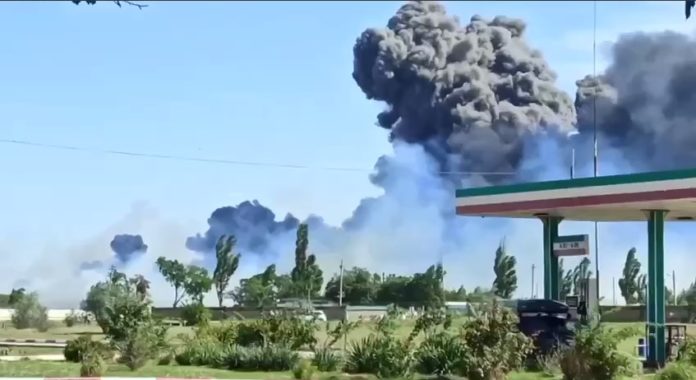 On the afternoon of August 9, a series of explosions occurred in the village of Novofedorovka in the Saki district of the temporarily Russian-occupied Crimea. In the Saki district, the evacuation of local residents began. The Ministry of Defense of the Russian Federation is talking about the detonation of ammunition, but Ukrainians are already beginning to rejoice at the strike on the invaders in Crimea.

Two people at the scene told Reuters that at about 3:30 p.m. local time, they heard at least 12 explosions in one minute.

About half an hour later, another explosion sounded, which one of the witnesses described as the loudest of all. After him, two clouds of smoke rose over the village.

Air raid sirens sounded in the neighboring town of Saki.

The Russian Ministry of Defense stated that at about 15:20 on the territory of the Saki airfield in the Novofedorovka area, several aviation munitions detonated at the storage site. According to the Ministry of Defense, no one was injured in the explosion, and aviation equipment at the airfield was not damaged.

“Measures are being taken to extinguish the fire and find out the causes of the explosion. According to a report from the site, there was no fire impact on the bunded ammunition storage area at the airfield, ”the Russian department said.

An evacuation has been announced in the Saki district. The occupation authorities have established a five-kilometer cordon zone in Novofedorovka.

In Crimea, a military airfield was attacked, where the Nitka training complex and ammunition depots are located near the resort towns of Saki and Novofedorovka, Russian Kommersant writes, citing a source in the Novofedorovka administration.

Takeoff and landing on the deck of aircraft carriers are practiced at the Nitka complex. Until 2014, the military unit of the Ukrainian army aviation was located at the airfield.

More than 200 km from Novofedorivka in Crimea to the nearest positions of the Ukrainian armed forces in the Kherson region. Traffic jams have formed at the exit from Novofedorovka: tourists are leaving the village in a hurry.