The Ukrainian Navy confirmed that they had sunk the Orsk ship of the Black Sea Fleet of the Russian Federation.

Ukrainian troops destroyed a large landing ship of the Russian Federation in the Berdyansk port. This was reported by the Naval Forces of the Armed Forces of Ukraine.

“In the port of Berdyansk captured by Russia, the large landing ship Orsk of the Black Sea Fleet of the invaders was destroyed,” the Navy said.

On the morning of March 24, residents of the city reported on social networks about explosions and a fire in the port. According to media reports, Russian ships were shot down: one of them sank, two more hurriedly left the scene of the incident. 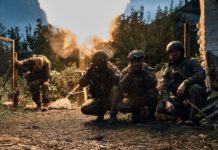 The head of the National Bank of Ukraine resigned